I recently have been running into space issues. I had a four hundred gigabyte hard drive that had almost not space remaining. It stored 8 running servers with dynamically expanding disks that had a maximum size of 40 gigabytes (on the host it was almost 42 gigabytes). I also had to store a backup server image (sysprepped) for copying to quickly create a new server if needed. Additionally, one of the hard drives was 70 gigabytes, not 40. All around, the total came to 459 gigabytes if each hard drive expanded to its largest.I suggested to my boss that we should convert each disk to fixed rather than dynamic disks to improve performance. He agreed and I began my search for how to convert disks. Much to my delight, converting a disk is a relatively painless (albeit slow) process. Here’s how:

For starters, From the window that comes up, *scroll down in

Alright, now that that’s out of the way, right click the server you want to convert. 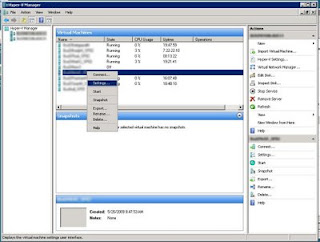 From there,*. In my case I only had one hard drive attached to my servers. 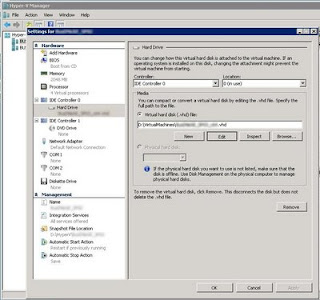 The window that comes up (Edit Virtual Hard Disk Wizard) will start on the "Locate Disk" step but should continue to the next step automatically in a few seconds. On the "Choose Action" step, (second down from the top). 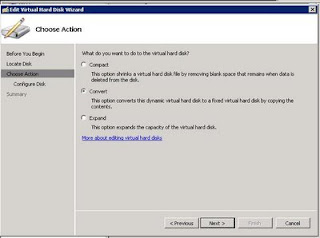 This will take you to the "Convert Disk" step. Here you need to set the destination filename for the conversion. In my case, I just selected the old file from the browse window and added a "_fixed" at the end of the filename. Any naming scheme works though of course. 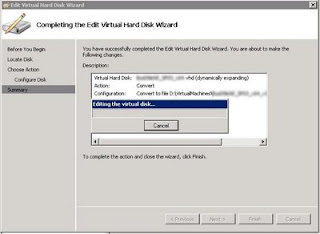 From here, just sit back and relax.

The conversion speed at the beginning can be a little deceiving. Mine got almost 25% done in the first five minutes. It actually took it about an hour to complete for forty gigabytes though. Reminds me of a cell phone. It reads full battery power until it has none left and then it says it has none five minutes before turning off.