EDIT: I tested it for a day now and up to this point, email works great. I got a contact to sync from my phone to my online address book as well. It did however take almost a day for it to appear online.  Also, a calendar entry made on my phone synced in under a minute to the online calendar. The other way around, a calendar entry made online synced to my phone in about two minutes.

Yesterday (August 30) Microsoft released a new functionality for Windows Live Hotmail that many have been waiting for for some time: Exchange capabilities.

If you want to skip all the background stuff, you may now head down the the bolded section titled "Now let’s get started…​".

This year Microsoft has released a lot of new functionality for Hotmail that has really changed its quality. With GMail being arguably the best web-based email service, Hotmail has a lot of catching up to do.  Thankfully, the first thing Hotmail started with was allowing pop3 access for free. The next step to compete with GMail was obviously free IMAP, which GMail released two years ago I believe. Instead though, Microsoft gives us exchange for Hotmail. How cool is that?!

What’s significant about exchange versus IMAP you ask? Well, exchange allows for the synchronization of more than just mail, unlike IMAP. With exchange you can sync your mail, your calendar, and your contacts. Not only does it synchronize your mail though, it utilizes something called "push mail". This means your phone doesn’t check for updates ever five, ten,, or thirty minutes; rather, the mail is "pushed" to your email client allowing for instantaneous delivery. Cool, yeah?

One thing before doing this though.

~~ Microsoft has not officially said that this works with Android. Many people have reported that it mostly works though. According to Microsoft, "Hotmail team will add Android to list of supported devices in the coming months after testing is completed." ~~

First, launch your mail application called…​you guessed it!…​"Email" From there, chances are your Accounts screen will come up. If this is the case, hit the menu button on your phone and select "Add Account". 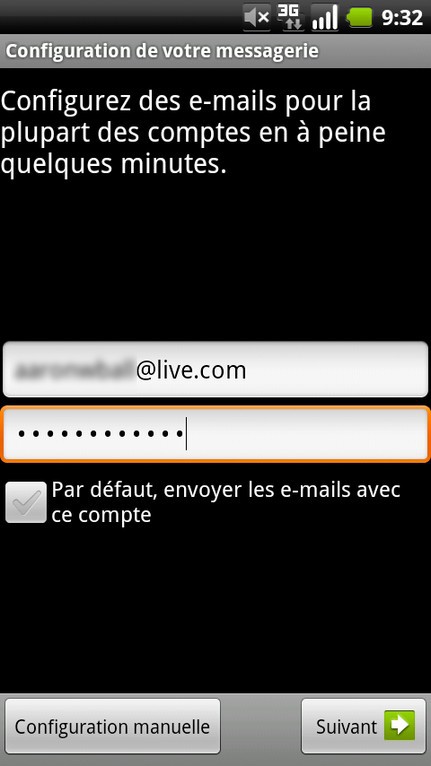 At this point the application will ask you what kind of mail connection this will be. You should see POP, IMAP, and Exchange. Select "Exchange".

On the window you’re taken to, most of the lines should be filled in for you. We do have to make a few changes though. 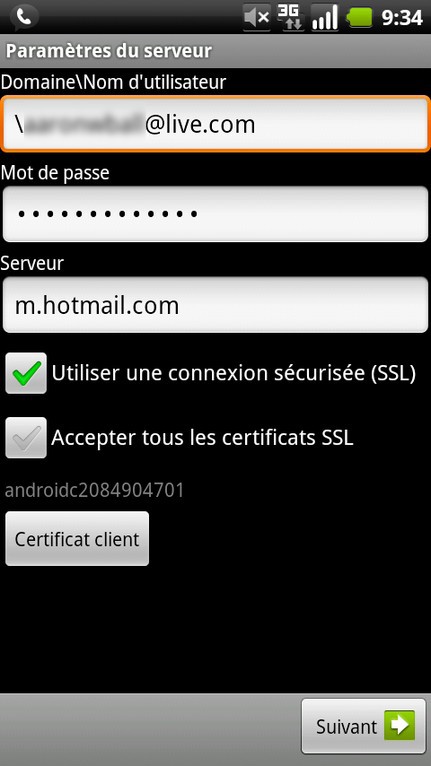